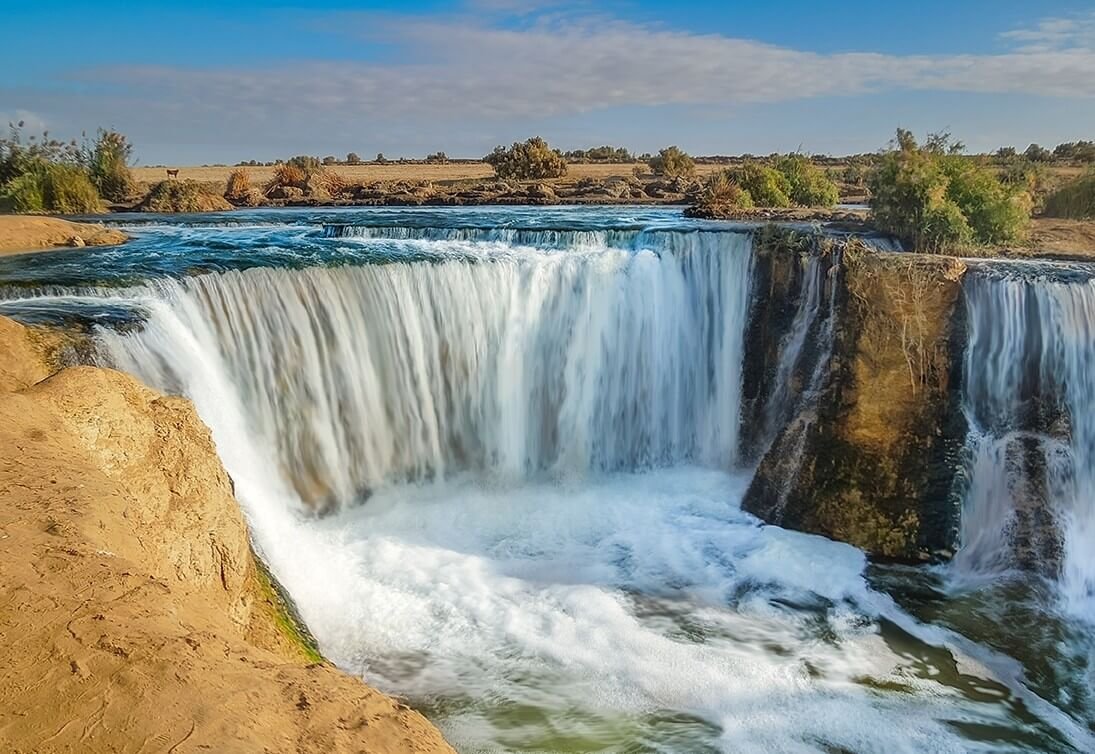 Wadi Al Rayan, One of the most famous tourist areas in Egypt.

It is located in the southwest of the city of Faiyum.

It is classified as a Nature Reserve by IUCN, the World Conservation Union.

There are two lakes in this nature reserve (High Lake – Lower Lake).

and there are waterfalls linking them.

There is a mountain near the lower lake.

This valley is characterized as one of the desert regions in Egypt.

There are a variety of desert plants and animals.

There is also a group of marine fossils.

In this article, we will show you all the information about this region. Because there are waterfalls in the city of Faiyum.

There are many activities that take place there.

Where many types of water sports are practiced.

Also, this region contains many types of birds, especially falcons, as well as wild animals such as white deer and sand foxes.

In Egypt, there are many nature reserves.

It contains a large group of animals and aquatic organisms.

Wadi Al-Rayan was named by this name because of the king, “Al-Rayan Bin Al-Walid” who remained in this area with his army.

Faiyum waterfalls – the only ones in Egypt

In this Egyptian city, there are two industrial lakes.

The goal of their establishment was to preserve agricultural wastewater.

These lakes, when established, protected Egypt from many problems, such as floods.

And protect agricultural crops from damage.

The Egyptian Ministry of Environment is concerned with nature reserves in all Egyptian cities.

Especially this reserve. Where repairs and development services are carried out continuously.

As the city of Faiyum is visited in large numbers on an ongoing basis (especially in the winter).

Read also: The Facts About The Pyramids of Giza The climate in the valley

The government considered working to create this area.

This has achieved several benefits, such as increasing the national income in Egypt (5 million pounds).

Cultivating a large area of land in Faiyum.

Increase the cultivation of an area of 10 acres.

This Egyptian city is characterized by moderate weather.

In winter, the temperature is 18 degrees.

And the humidity reaches 50%.

We advise you to visit this city,

as the weather is great for taking tours.

You can visit the waterfalls and take pictures.

Learn about wildlife, and see animals and marine creatures.