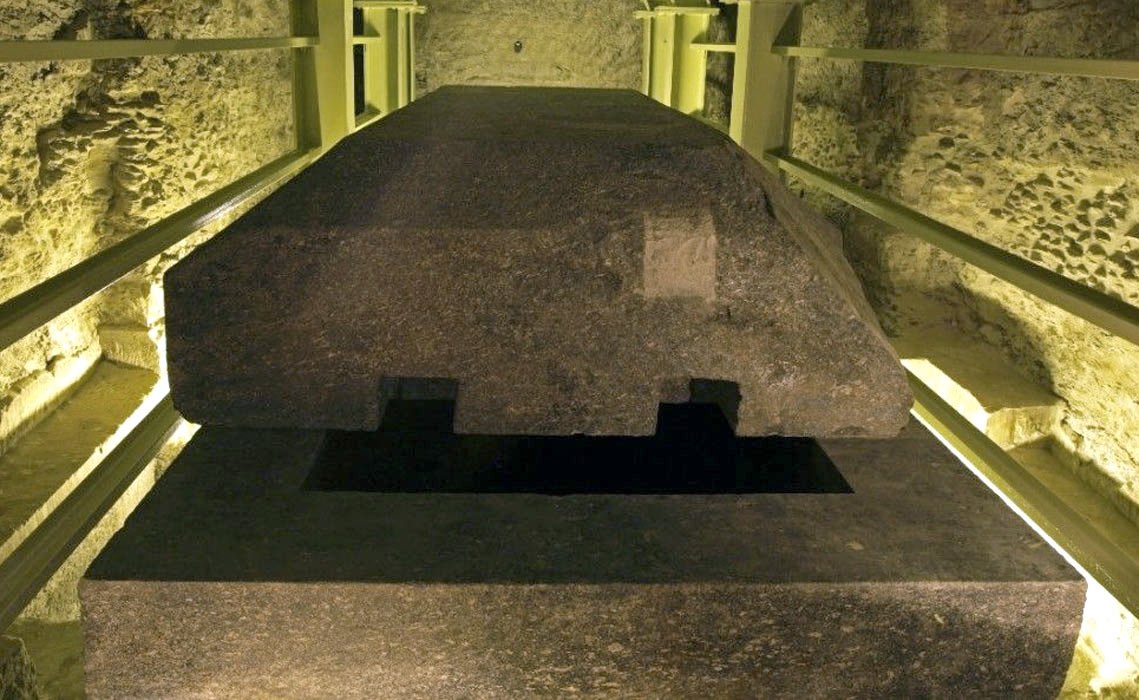 The Serapeum of Saqqara, also known as the Serapeum of Apis, is a subterranean complex located in the ancient city of Memphis. The site is interpreted by Egyptologists to be the burial place of sacred Apis bulls, dating back to the time of Ramesses the Great.

In ancient Egypt, there were two types of pyramids:-

pyramid-shaped tombs and mastaba tombs. Pyramid-shaped tombs include those built at Giza and Saqqara (which is also known as Sakkara). Mastaba tombs are flat-topped structures with sloping sides and rectangular bases. They are found throughout Egypt but are most common in Saqqara because it contains many limestone quarries where these types of structures could be easily constructed without requiring much labor or expense.

The Serapeum of Saqqara was an ancient temple in Egypt that contained a series of catacombs where mummified sacred bulls were buried. It was built by the pharaoh Apries, who ruled between 589 and 570 BCE. The site is interpreted by Egyptologists to be the burial place of sacred Apis bulls, dating back to the time of Ramesses the Great. The Serapeum was built on a rectangular island on a small lake at Saqqara near Memphis (now known as Cairo). The temple itself was surrounded by a wall enclosing an area of about 1/2 acre (1 hectare). A main entrance led into a corridor that had four rows of six pillars each – representing all the gods in Greek mythology. Behind these pillars were many rooms where offerings could be made to the bull-gods and priests could perform rituals for them.

The temple was excavated by Auguste Mariette in 1851 CE, who found over 500 mummies from sacrificed bulls within it. Most of these were later moved to museums in Cairo, but some remain at their original location today at the British Museum in London or in Berlin

The Serapeum was originally built during the reign of Amenhotep III (18th dynasty). However, its roots can be traced back to at least the 6th dynasty (2345–2181 BCE). During this period, it was part of a large temple complex called Hwt-nswt-bnst (“House of Life”). This complex was expanded by Ptolemy II Philadelphus who dedicated a new temple to Ptah and Nekhbet (goddess) as well as adding an entrance gate decorated with scenes from Egyptian mythology.

The structure was built in honor of the bull Apis

which was considered a manifestation of Ptah (the god of creation), Thoth (the god of knowledge), or Osiris (god of death). The site was originally built by pharaoh Amenhotep III in 1384 BC and later expanded by his son Akhenaten in 1353 BC. However, it fell out of use after his reign ended around 1334 BC because he had changed his religious beliefs towards monotheism.

It was then rediscovered by Alexander the Great’s general Ptolemy I Soter who reestablished its worship amidst other Egyptian gods like Amun-Re and Isis. He also moved some artifacts from other temples in Egypt there so that they could be worshipped alongside Apis.

The Serapeum was destroyed in 391 CE by Christian monks from Alexandria who sought to destroy all pagan cults in Egypt. The site remained abandoned until its rediscovery in 1819 CE, when Giovanni Battista Belzoni discovered several stone sarcophagi containing mummies and other funerary artifacts. These objects were sent back to Europe for further study but most were lost during World

The Serapeum of Saqqara is the burial place for sacred Apis bulls, dating back to the time of Ramesses the Great. The site is interpreted by Egyptologists to be a cult center and temple dedicated to the worship of Osiris and Serapis, who were both gods associated with mummification.