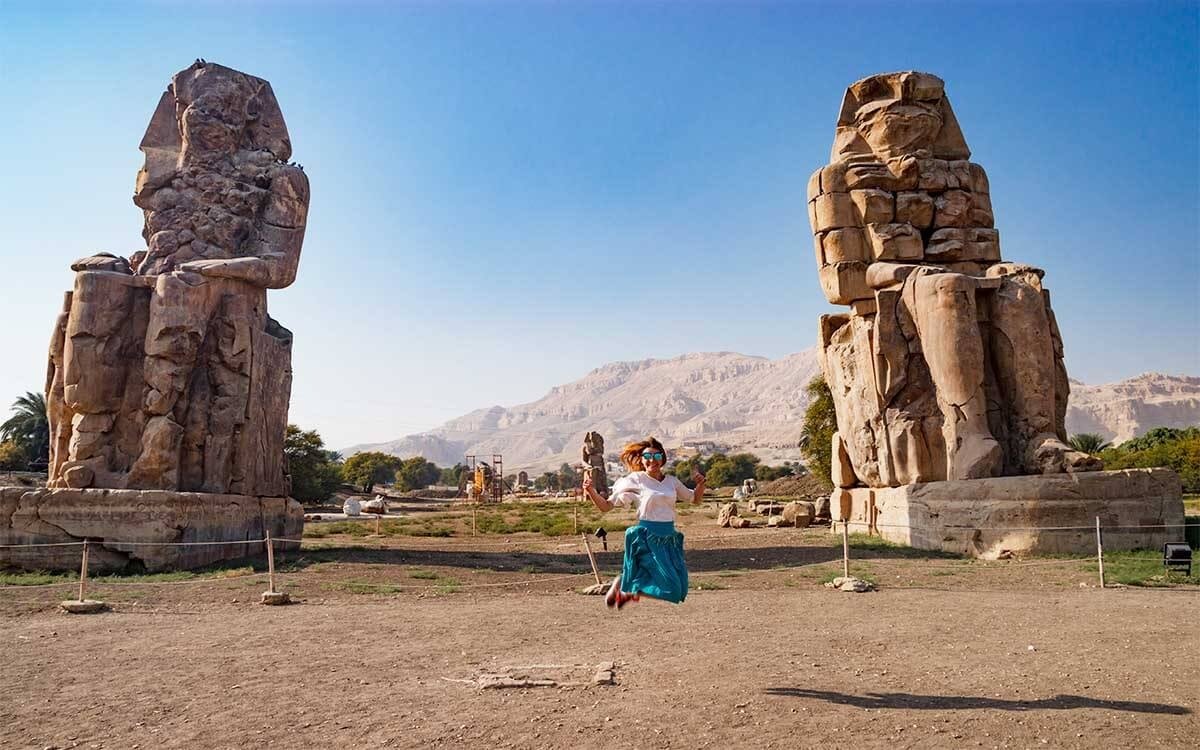 The Colossi of Memnon (also known as el-Colossal or el-Salamat) are two monumental statues representing Amenhotep III (1386-1353 BC) of the 18th Dynasty of Egypt.
They are located west of the modern city of Luxor and face east looking toward the Nile River.
The statues depict the seated king on a throne ornamented with imagery of his mother, his wife, the god Hapi, and other symbolic engravings.
The figures rise 60 ft. (18 meters) high and weigh 720 tons each; both are carved from single blocks of sandstone.

They built their ancestors as guardians of the Misdemeanor Council of Amenhotep III, who once stood behind them. The ancient practice of using ancient monuments and buildings as reference materials for new structures all contributed to the disappearance of the enormous complex. Little of it remains today except for the two colossal statues which once stood at its gates.

Their name comes from the Greek hero Memnon who fell at Troy. Memnon was an Ethiopian king who joined the battle on the side of the Trojans against the Greeks and was killed by the Greek champion Achilles.
Memnon’s courage and skill in battle elevated him to be a hero among the Greeks.
Greek tourists, who saw the impressive statues, the legend of Memnon were associated with Amenhotep III, and this Egyptian historian Manetho of the 3rd century BC also suggested that Memnon and Amenhotep III were the same people.

The Greek writers referred to the entire complex regularly as the Memnonium and the site became legendary for divination after one of the statues began making noises interpreted as oracles.
From ancient times to the present the Colossi has been a popular tourist attraction and in the present day and you can see graffiti inscribed on the base from visitors thousands of years ago.

Amenhotep III lived during the period of the New Kingdom (c. 1570-c. 1069 BC) in which Egypt became a country of international power and wealth. His father, Thutmose IV (1400-1390 BC), left his son a prosperous and stable empire of substantial riches which the new king used wisely.

He was only twelve years old when he came to the throne and married Tiye, a girl of only eleven or twelve years old, who came from a prestigious family.
Time was given the title of Great Royal Wife, an honor which even Amenhotep III’s mother had not been accorded. This title reflects the great status of both Amenhotep III and Tiye as a royal couple of impressive power.

In keeping with the traditions of the pharaohs, Amenhotep III almost instantly embarked on building projects throughout Egypt.

His vision was of land so splendid and opulent that it would leave one in awe and the over 250 buildings, temples, statuaries, and stele he commissioned attest to his success in realizing this.
His pleasure palace at Malkata, on the west bank of the Nile near Thebes, covered over 30,000 square meters (30 hectares) and included spacious apartments, conference rooms, audience chambers, a throne room and receiving hall, a festival hall, libraries, gardens, storerooms, kitchens, a harem, and a temple to the god Amun.

Amenhotep III commissioned so many monuments, temples, and other building projects that later Egyptologists attributed to him an extraordinarily long reign because it seemed impossible that one king could have had the resources to accomplish what he did in less than 100 years.
Amenhotep III, of course, ruled for far less time but was so effective a king that he accomplished far more than most.

The qualities of the pharaoh Amenhotep

The pharaoh was a master of diplomacy who placed other nations in his debt through lavish gifts to ensure they would be inclined to bend to his wishes.
His generosity to friendly kings was well established and he enjoyed profitable relationships with the surrounding nations which filled Egypt’s royal treasury.
He maintained the honor of Egyptian women in refusing requests to send them as wives to foreign rulers, claiming that no one of them had ever been sent to a foreign land and would not be sent under his reign.
While other nations may not have felt at all flattered by this policy, it expressed adherence to tradition and cultural values which won their respect. Throughout his reign, Amenhotep III improved upon his father’s very sound policies of rule and in religion, he did likewise.

Amenhotep III was an ardent supporter of the ancient religion of Egypt and expressed his interest lavishly in the patronage of the arts and in building projects.
Among the most opulent was his mortuary temple complex which included the massive figures of the Colossi of Memnon.

Amenhotep III’s mortuary complex was larger and greater in every way than anything previously built in Egypt.
At the time of its construction, it was more magnificent and awe-inspiring than the Temple of Karnak.

It covered over 86 acres (35 hectares) and included numerous rooms, halls, porticos, and plateaus which probably mirrored the vision of the Field of Reeds, the Egyptian paradise.

In their time, the colossal statues of the king would have flanked a walkway, probably ornamented with statuary, leading to the complex.