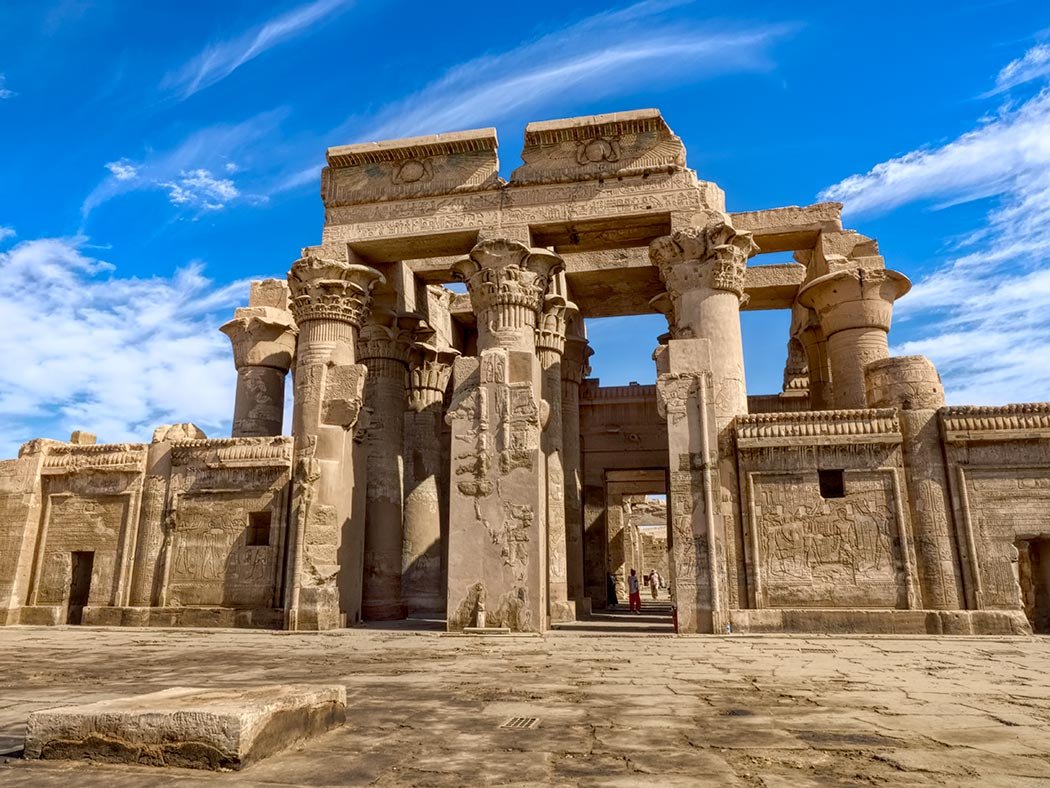 to worship the god Horus.

is that it was designed like many ancient Egyptian temples.

The construction of the Kom Ombo Temple was completed in the Roman era.

What makes this temple distinct from many of the temples in Egypt?

Kom Ombo Temple was built in the city of Aswan in Upper Egypt.

which is famous for many temples.

At first, This temple was built to worship the Gods Subic and Horus.

It was known during this period that each deity. should have a special temple for his ritual worship.

The temple is very popular, Kom Ombo Temple in Aswan

is one of the most visited archeological sites in Aswan.

Aswan is one of the most cities in Egypt

that contain large numbers of pharaonic temples and monuments.

The name Kom Ombo is considered an abbreviation of (Gold Hill).

In the past, this area was used to reach gold regions.

The temple overlooks the eastern bank of the Nile.

The foundation of the temple dates back to Ptolemy VI Philometor.

However, the completion of the construction of Kom Ombo Temple in Aswan.

continued until the era of Ptolemy XIII Theos Philopator.

by the presence of many pharaonic inscriptions.

Second, next to the temple is the Museum of Crocodiles.

where there are many mummified crocodiles from the Pharaonic period.

Several drawings and reliefs are inside the tombs and temples.

for example, have been seen symbolizing the withdrawal of blood from the body.

what is now known as cupping treatment?

Several parts of the Temple of Kom Ombo were built recently in the Roman era.

especially the construction of some columns.

Read also: Queen Hatshepsut and her rule over Egypt for 22 years The Temple of Kom Ombo was completely created in 400 years

whereas some documents confirm that Temple of Kom Ombo

at first, it was built on the ruins of the temple of King Thutmose III.

Secondly, in the Ptolemaic period.

the temple was restored to be a place for African elephants.

Seleucids used Indian elephants in their wars against the Ptolemies.

Ptolemy V Epiphanes was the first to start.

building the Temple of Kom Ombo with its current design.

Then Kom Ombo Temple was restored.

during the reign of Ptolemy VI Philometor.

Later on, restoration work on the temple continued

until the reign of King Ptolemy VIII Physcon.

The construction of the temple was completely completed

except for the stage of inscriptions and drawings

which were completed in 14-37 BC in the era of the Roman Empire.

In AD 218 the construction of the temple was completely completed

during the reign of the Roman Emperors Caracalla and Geta Macrinus.

and the temple still exists today in Aswan, Egypt.