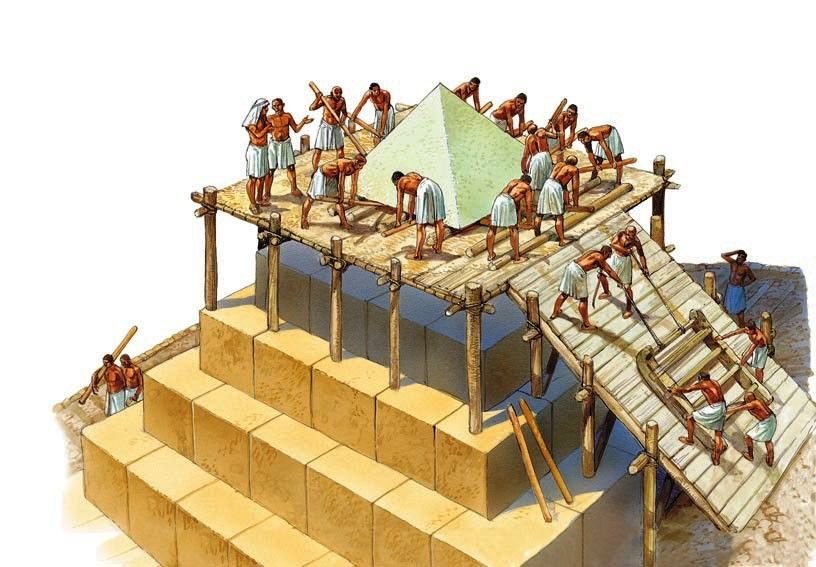 The pyramids of Egypt were built as funerary monuments over a period of 2700 years, starting from the beginning of the era of the ancient state, until the end of the Ptolemaic era, where the building of the pyramids reached its peak in the era of the pyramid, which begins under the rule of the third royal dynasty, and ends under the rule of the sixth almost, in the period what Between 2686–2325 BC.

It was common to build it for the burial of kings in that period, and the main parts of it during the era of the Old Kingdom were the same pyramid that contains the grave, and it is located inside a high desert land in a closed place and is nearby to a funerary temple, and a corridor leads to marquees It is also on the edge of an agricultural area, and it could be Get across the river by a canal.

The Pharaohs built more than 138 pyramids in Egypt, but the largest of all is located in the Giza region and is known as the pyramid of Khufu. This great pyramid is surrounded by many questions in terms of the way it was built and its secret, which is not known until today.

The process of building the pyramids was a controversial topic. According to Donald Redford, a professor of classics and ancient Mediterranean studies in Pennsylvania, methods of extracting ancient stones in Egypt used to build the pyramids are still under study, as researchers found evidence indicating the use of a copper chisel in sandstone extraction Limestone, but hard stones such as granite and diorite would need stronger materials than it was, and Dolerite, a hard black fiery rock, was used in Aswan quarries to remove the granite.

Huge hammers were used during the drilling process to grind the stone around the edge of the granite block to be extracted, where about 60 to 70 men participated in breaking up the stone, then they installed wooden pegs through holes that were slit at the bottom and filled with water, which led to the expansion of the pegs and the cracking of the stone.

The basis of the pyramids is often made of local limestone, while the outer layer of the pyramids is made of the finest limestone, which gives it a white shine that can be seen from a distance, as it consists of granite, basalt, or any other solid stone that can be painted with gold, silver, Or electrum, which is a mixture of gold and silver, which leads to a large reflection of sunlight.

The Hands that Built the Pyramids

Donald Redford a professor in ancient Mediterranean studies in the US state of Pennsylvania.
he saw that the information that was prevalent that the slaves built the pyramids is a wrong opinion, as it was found that farmers and peasants participated in the construction work of the pyramids, and obtained incentives in exchange for that, and from them to be exempt from taxes, as they were given some food and free clothing in addition to providing housing for them, and accordingly, the number of those who participated in the construction of the pyramid of Khufu alone, which lasted for 23 years, estimated about two thousand men to three thousand men.

A team of physicists from the University of Amsterdam, in a study published in the magazine (Physical Review Letters) in 2014, found that the ancient Egyptians were using huge sleds that could be pushed or pulled by a group of workers to be able to transport stones by land, and it is possible that the sand in front of the sleigh It has been submerged in water, which reduces friction, and according to Daniel Boone, professor of physics at the University of Amsterdam, the moisture of the Egyptian desert can help to reduce friction greatly, which means that pulling a huge sled on it will require only half the number of people compared to dry sand. Where a sculpture was found inside an ancient cemetery in Egypt, showing some 173 men pulling stones by pulling them with this greased pillar.
There is a consensus among most Egyptologists that a slope system was used to pull stones at the pyramids, but they are not sure how to design them, as there is little evidence of them, but several hypothetical designs have been proposed over the past few decades, and more may be available From the data from the mission of the Al-Ahram Survey, which is an initiative specialized by researchers in three different universities, in addition to the Institute for the Preservation of Heritage and the Egyptian Ministry of Antiquities, where the project scientists conduct a process of surveying and rebuilding the pyramids of Giza using a variety of technologies